Remembering One of Our Own: Andrew Long’s Legacy at Vestavia East

When people who knew Andrew Van Long think about him, they don’t concentrate on his illness. Instead they remember him for the bright, kind, determined boy he was.

“What we have once enjoyed, we can never lose,” Helen Keller writes. “All that we love deeply becomes a part of us.”

That quote, along with a collage of photos and a Bible verse, was chosen by the Vestavia Hills High School graduating class of 2017 to memorialize Andrew in what would have been his senior yearbook.

Shortly after starting second grade at Vestavia Hills Elementary School East, Andrew lost his battle with cancer on Sept. 20, 2007. His memory is preserved through the Andrew Van Long Courage Award, the Andrew Van Long Memorial Track and Field, a mural by Julie Alley and in the hearts of the community that fought alongside him.

Andrew’s mother, Anne, remembers her son as “responsible and spunky,” with the classic characteristics of a first-born child. “He had leadership skills and he wanted to use them,” Anne says.

Anne, who has two daughters—Sarah, 16, and Katie, 8—with her husband, Bruce, is quick to avoid putting Andrew on a pedestal, however, pointing out that, like all little boys, he could be stubborn at times. “I like to say he was perfect in all his imperfections,” she says.

She helped him channel his stubbornness, she says. “Hopefully, all of those things served him well in his illness,” Anne says. “I think they did, because certainly his illness didn’t break him. He never gave up or got to a point where he just became used to being a sick kid.”

Andrew and his best friend Graham Thompson were in Nancy Pearson’s kindergarten class at East. Thompson, a freshman in engineering at Vanderbilt University, remembers Andrew’s sense of humor and playing Legos. He regards his friend’s life as, “one of love and [that] shows how the community can come together, but also courage and toughness.”

“He’s a hero in my eyes,” Graham says of the “undisputed Uno champion of the world.”

Nancy, now retired from teaching and working part-time in reading intervention at East, says Andrew had, “incredible courage, perseverance and maturity all exhibited far beyond his years.”

When Nancy found out she had colon cancer in May 2007 and had to undergo radiation, it was Andrew who offered to show her the ropes.

“I was the adult, and I was supposed to be teaching him all that time,” says Pearson, who has been cancer-free since her initial treatment. “But really in the end, he taught me. He taught me how to live—how to be a good cancer patient.”

VHEE principal Dr. Mark Richardson recalls Andrew being a role model for other children dealing with adversity. “He was very brave,” Mark says. “He didn’t seem to let his physical condition affect his positive attitude.”

Every year during May Day Play Day the Andrew Van Long Courage Award is given to a student who has shown bravery and perseverance through a physical hardship. Ten awards have been given out so far, and all the recipients’ names are printed on a plaque next to a picture of Andrew in the school.

Under a leafy oak tree on the school’s campus a plaque reads: “Blessed is the man who perseveres under trial, because when he has stood the test, he will receive the crown of life that God has promised to those who love him.” The plaque marks the 2008 dedication of the Andrew Van Long Memorial Track and Field. During the dedication, Graham read a poem and the class released butterflies to honor their friend. Years later at the graduation of the class of 2017, Graham, the class vice president, included Andrew in his speech.

The lunchroom mural at East bearing Andrew’s likeness was taken down this summer for remodeling, but photographer Bob Barker was able to capture Julie Alley’s art before it was removed so it can be framed and hung elsewhere in the school. For the Longs, the support of their friends, neighbors and even strangers was valuable and points to the close-knit feel of Vestavia Hills.

“I don’t know if Andrew’s story is just about Andrew or just about us,” Anne says. “It’s about the whole community and everything people were willing to do for us and willing to help, even if it was big or little.”

Anne says she is excited to see her youngest daughter experience all of the things Andrew loved so much about being a kid in Vestavia and a student at East.

“Some of that stuff is still kind of timeless,” Anne says, thinking of May Day Play Day, the Kids Mercedes Marathon and walking Katie into the school where her big brother left such a lasting impression. 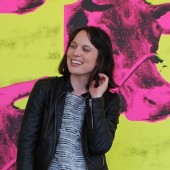 Rebecca Sheehan Caine lives in Vestavia Hills with her husband, Tim, and their two cats, Cleo and Hamilton. She can be found walking the trails behind the Library in the Forest, splashing in puddles with her 2-year-old neighbor or enjoying a Reuben from Diplomat Deli. Rebecca makes a mean mimosa and can probably beat you at MarioKart.

Getting to Know All About You